READ ABOUT US IN YOUR LOCAL PUBLICATIONS

NIMA Kitchen & Bath offers a diverse selection of Canadian- and Italian-made, state-of-the-art kitchens, which are priced for all budgets

Сooking an exquisite meal is pleasurable. Cooking an exquisite meal in a state of-the-art kitchen, the kind in which NIMA Kitchen & Bath specializes, is an extraordinary experience. Established 40 years ago by the husband-and-wife team of Nick and Fiorella Marinelli, NIMA is a family-run business that includes the couple’s three daughters: Tania, the showroom co-ordinator and marketing manager; Monica, the office manager; and Sarah, who does PR work and consults on special projects, as well as Nick’s brother Mario, the sales manager for the past 40 years; Robert, who has been the shop manager for more than 20 years; and the many long-standing employees. “The important things in our lives have always been family, friends and honesty,” Nick says. “It has always been important for me, for us, to beconsiderate, and that is what defines our lives.” With both sets of parents immigrating to Canada from Italy (Nick’s parents immigrated from Molise, and Fiorella’s from Abruzzo), Nick and Fiorella know what hard work is all about.

At 11 years old, Nick worked in the grocery store that was downstairs from the family’s apartment on Dundas Street in Toronto. He also shone shoes for some pretty famous people, including Hockey Hall of Famer and Liberal Senator in the Canadian Senate, Frank Mahovlich. When he was in Grade 4, Nick would stay behind at recess in order to get help from the teacher to write cheques for the family bills, such as the hydro, phone and mortgage. “I was doing exactly the same,” Fiorella says. “At 10 and 11 years old, we knew how a mortgage worked. And while my parents worked, my siblings and I would do the cooking and cleaning. My mother was a seamstress, so I learned how to make my own clothes; there was no money to buy new ones.” for collateral, which they both agreed to do.” 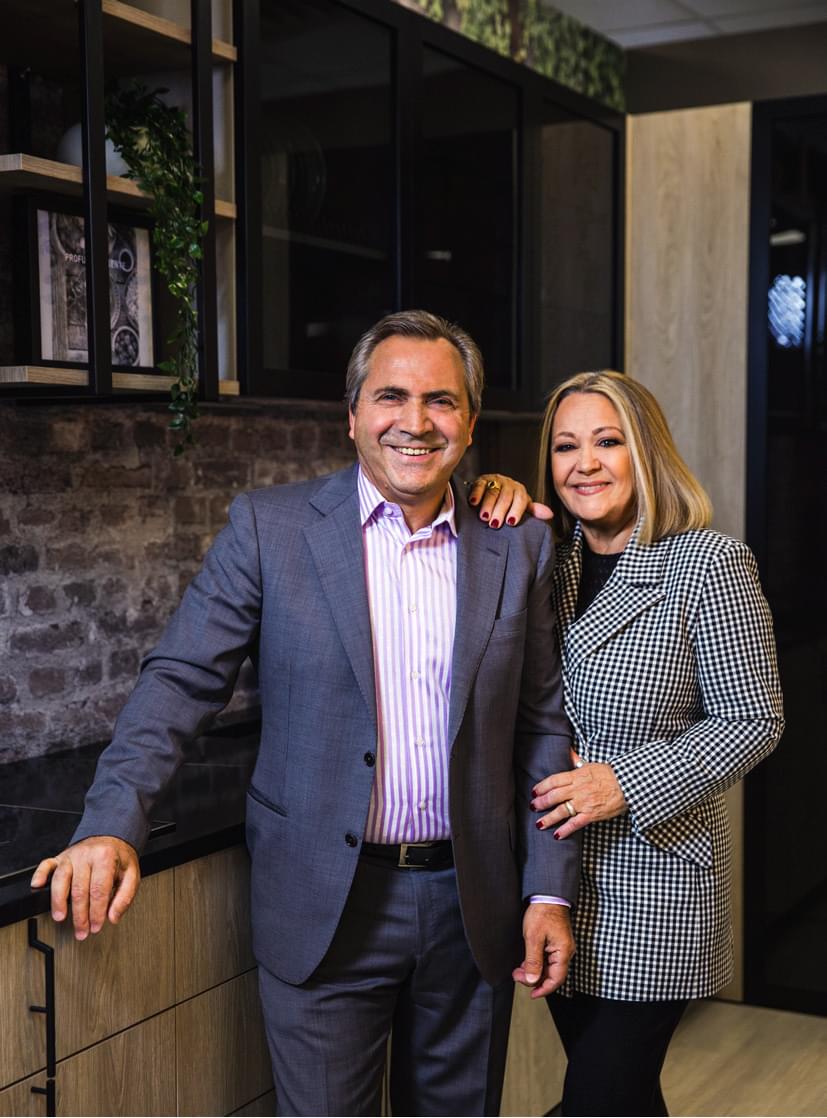 We believe the kitchen is the centrepiece of every home

Their bid was successful, and the couple opened their first store on Steeles Avenue West, across from their current location at 2060 Steeles Ave. W., in Concord, Ont. After four to five intensive years of hard work, the loan was paid off. “All of our money was made by saving payroll, by saving on expenses,” Nick says. “The product was a good product. And we also had a lot of assistance. My father helped us — he was like a human assembly line. My brother, Mario, has been with us from Day 1. Fiorella’s father helped us with the building of the current location. My late brother, Angelo, also helped us a lot.”

Nick’s brother Angelo, who passed away in 1998, was deeply involved incharity work, both local and abroad. He was an integral part of establishing The Foundation and Hospital for Abandoned Handicapped Children in El Salvador called Hogar Padre Vito Guarato. After Angelo’s passing, NIMA continued to contribute to Angelo’s legacy by hosting a familyrun golf tournament for 20 years. As well, NIMA is and has been involved in building several things that were desperately needed by the hospital, such as a clean water cistern, a covered recreational area and various transport vehicles for supplies and transporting children. In total, more than $600,000 has been raised, with some of the funds supporting charitable causes closer to home, such as SickKids Hospital.

What sets NIMA apart, aside from Fast forward to the couple, now married and in their early 20s, with both working for Salvarani Kitchens:

Fiorella as a bilingual secretary and Nick as a sales manager. “We ran the operation for a year, at which point Salvarani had some financial difficulties and went into receivership,” Nick says.

“The company’s inventory was being sold off, so closed-envelope bids were being tendered. It was a big decision. We had no money, but we really wanted to buy the assets. We decided we would offer a quarter million dollars for the inventory, but we only had $10,000 saved. The only way was to get both our parents to put their houses up its 7,000-square-foot spectacular highend showroom, is its mix of made-in-Canada and made-in-Italy offerings. 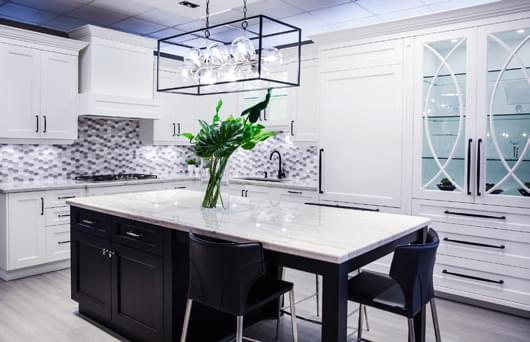 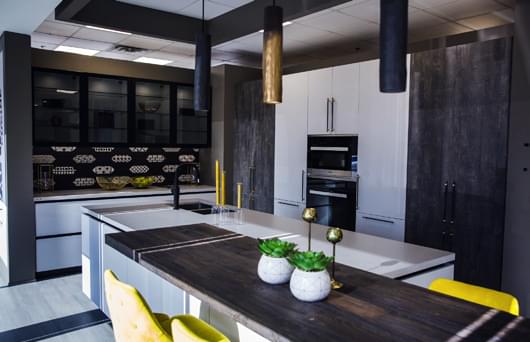 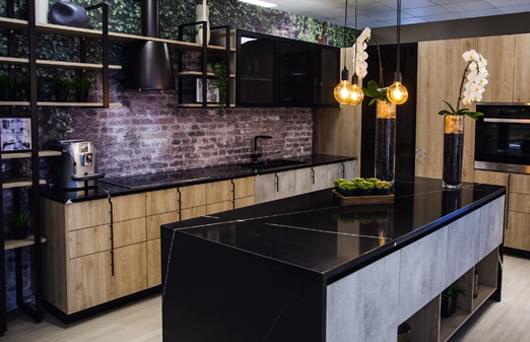 As the exclusive Canadian importer of ARAN Cucine (the partnership has been one of NIMA’s biggest business highlights), which is well-known for manufacturing the most-sold Italian cabinetry worldwide, NIMA’s original position in the kitchen arena centres on the exclusive styles of Italian interior design that it provides to homes all over the Greater Toronto Area (GTA) and well beyond. “The broad range of designs, including the modern Italian cabinetry imported from ARAN Cucine, and the traditional designs we manufacture on-site make us original,” Nick says. “And with our on-site 20,000-square-foot warehouse and shop, we are also able to customize all of our designs to best suit the needs of our clients.”

Working with a variety of local builders and developers, NIMA is also a key kitchen provider for top condo projects across the GTA and in the United States, including the Olympia Centre in Chicago; Aura at College Park, Toronto, the tallest residential condo tower in Canada, by Canderel; St. Gabriel Village, at Bayview and Sheppard avenues, and The Residence of Avondale at Yonge Street and Sheppard Avenue, both by Shane Baghai; and Harbour Plaza – West Tower, by Menkes.

NIMA also has a number of ongoing kitchen partnership projects, including Leaside Manor by Shane Baghai and The Diamond by Diamante Development Corporation. “We believe the kitchen is the centrepiece of every home, and it’s our mission to create a beautiful and inviting gathering place for all of our clients and their family and friends,”

Nick says. “We have kitchens for all budget levels, all providing good quality,” adds Fiorella. “And anything that needs to be customized, we do ourselves. We can satisfy any desire, from modern to the more classical designs, in our warehouse. Service and honesty are at the core of our business;

Celebrating 40 years in business is an accomplishment for any organization and NIMA Kitchen and Bath is no exception. A Thursday evening in October marked a very special celebration as NIMA, in honor of their 40th Anniversary, hosted the unveiling of their recently renovated and redesigned showroom boasting 10,000 square feet of stunning kitchens and vanities to explore. The family-run business prides itself on providing impeccable service and quality cabinetry, both manufactured onsite and those exclusively imported from Italy by ARAN Cucine.

The cocktails and hors d'oeuvres evening saw a number of special guests from the community in attendance including family and friends, local clients and industry professionals. NIMA Kitchen and Bath also works with several developers and builders in the city and their Vaughan showroom is located at 2060 Steeles Ave. W. It was a great evening to celebrate the wonderful achievement of 40 years in business. Congratulations! 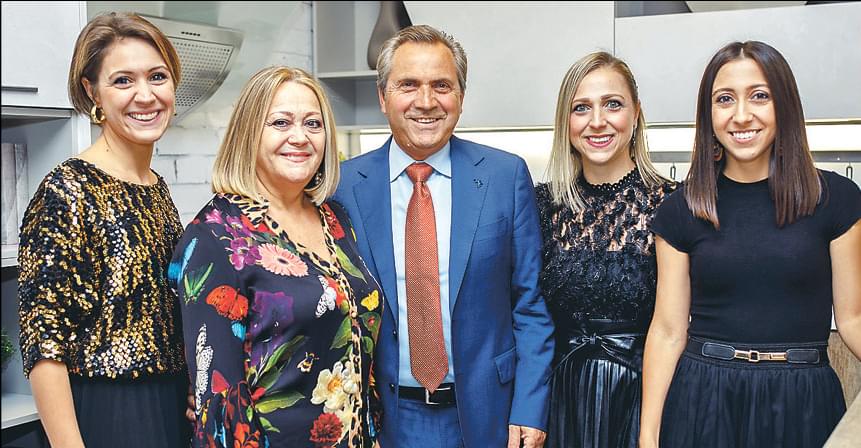 Request a free consultation with one of our designers. Attach your measurements or bring them in with you to help us serve you better. We will follow up to confirm your appointment.

*All fields must be filled
close